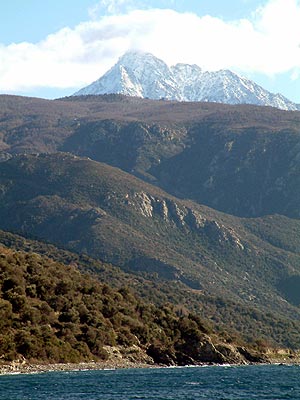 Mount Athos, or Agio Oros is the monastic center of the Greek Orthodox Church, a state-within-a-state and a living museum and spiritual center of Greece.

If you want to visit agio oros, just leave it to us! All you need to do is send us a photocopy of your password and we will book your stay in the Mount Athos office in Thessaloniki. We will then inform you of the date the necessary documents will be ready for you to pick them up from the Mount Athos office in Ouranoupoli, paying a small fee of about 25 euros. Every morning a boat is available to take you to Mount Athos at 9.45 am.

But before all these, one of our cars will be waiting at the airport of Thessaloniki for you to drive to Ouranoupolis. You can park it in the available parking of the village for as many days as you wish to stay and pick it up afterwards to continue your vacation to other places in wonderful Chalkidiki or drive back to the airport comfortably.

The peninsula of the Holy Mountain (HM), the north-eastern ‘finger’ of the gigantic ‘palm’ of myth of Chalcidice, which juts out more than 60 km. into the Aegean Sea, occupies an area of 332.5 sq. km. Its terrain can be described as irregular, consisting of rows of hills which start out from Megali Vigla side by side in the direction of Athos to culminate at the end of the peninsula in the legendary stone giant of Athos, of a height of 2,035 m.

The land is well-planted, without being particularly rich soil. It has become rich, however, in the gardens of the settlements, where centuries of the toil of monks have produced a soil which is fruitful because of a natural fertiliser - leaf mould - brought from the woods.

Before its monastic community was established, the peninsula was the home of tribes "speaking two languages", "a few Chalcidic, for the most part Pelasgic". Their communities were no more than "small towns", with few inhabitants and of little historical significance (Thucydides IV, 109 - Strabo VII, 35). The names of some of the towns within the boundaries of the peninsula are known to us: "Dion, Olophyxos, Acrothoon, Thyssos, Cleonae" (Herodotus VII, 22). Beyond the peninsula were the towns of Panormos, Stratonice, Acanthos, Singos, Apollonia, Stagira, Amphipolis, Galepsos, Olynthos, Assa, Pylorus, Sarte, Torone, Potidaea, Ouranoupolis, etc. (Claudius Ptolemaeus, Geogr., 13, 11 - Herodotus VII, 122 - Strabo VII, 35 - Stephen of Byzantine, ed. Meineke, 6.65, 135, 229, 523, 557, 685). 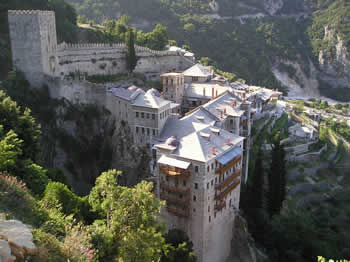 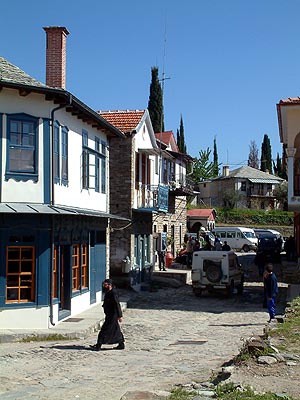 Karyes, the capital of Mount Athos

Karyes is the capital of the Holy Mountain of Athos. Historically it was a separate form of monastic community. The Abbot of the Lavra of Karyes - the socalled Mesi - held the title of the Protos ('First') of the 'Assembly of Elders'. Karyes is the seat of the Holy Community of the Holy Mountain and of the Holy Epistasia, as well as of the delegations of the twenty monasteries. It also has a number of authorities and services, such as the civil governor's office, the police station, the post office, the office of the Telecommunications Organisation of Greece, and a doctor's surgery. The famous Athoniada school is also at Karyes. One important aspect of the life of Karyes is the history of its market and its workshops. At one time, the Karyes market was termed 'the Paris of Chalcidice'.

As early as the 10th century, Karyes was a market which did a considerable amount of business. On a number of occasions, this caused disturbances in this holy place and the issue had to be resolved by the intervention of the Ecumenical Patriarchate. Under the Turkish rule, there is evidence of trading in a large number of commodities. The 19th century could be described as the golden age for the development and running of shops and establishments trading in a variety of products by both monks and laymen. The disorder which resulted led to the taking of various decisions restricting these practices by the Holy Community and the Patriarchate, but without these being implemented in practice. The traditional weekly open-air market and the annual trade fair on 15 August gradually declined in importance and fell into abeyance.

Without doubt, the most important building in Karyes is the Church of the Protaton - dedicated to the Dormition of the Theotokos - which is also the oldest church on the Holy Mountain. In style, the church is a three-aisled basilica without a dome, with the later addition of a side aisle. The history of its architecture extends from the 10th to the mid 20th century - the date of its latest restoration. Figures such as Magister Leon, brother of Nicephorus Phocas, and Ioannes Iberas were benefactors of the Protaton and adorned it with many treasures. After the fire of 1290, the wall-painting of the church was carried out by the leading artist of the Macedonian School Manuel Panselenus, in the early 14th century. In the time of the Turkish occupation, various supplementary works were undertaken. In 1781 the bell-tower was built on earlier foundations. With the passage of time the building began to show evidence of dangerous damage, which necessitated its restoration. This work was begun in 1955 and succeeded in saving the famous wall-paintings, though not without creating certain problems.

The icons of the Blessed Virgin known as 'Axion Estin' and of Christ 'Antiphonetes' are renowned throughout the Orthodox world. 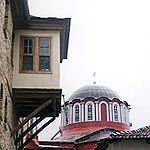 Megiste Lavra
The Holy Monastery of Megiste Lavra is on the south-eastern side of the Athos peninsula at a place called Melana, an area where fragments of monuments which take us back to the pre-Christian era are to be found... 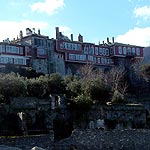 Vatopedi
The Holy Monastery of Vatopedi is on a hill by the sea on the north-eastern side of the Athos peninsula... 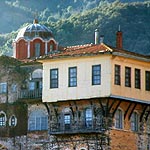 Iveron
The Holy Monastery of Iveron was founded towards the end of the 10th century by St John the Iberian (i.e., Georgian), a little after the founding of the Monastery of the Megiste Lavra and of Vatopedi... 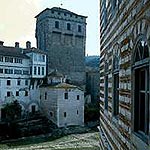 Chilandari
The Holy Monastery of Chilandari stands on the north-eastern side of Athos. Some maintain that its name comes in all probability from the founder of an older monastic house on the site... 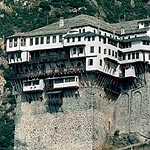 Dionysiou
The Holy Monastery of Dionysiou, or 'Nea Petra', stands on a narrow and precipitous rock at a height of 80 metres above the sea, between the Gregoriou and Aghiou Pavlou Monasteries... 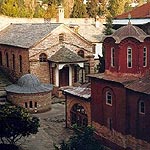 Koutloumousiou
The Holy Monastery of Koutloumousiou is near Karyes, and is dedicated to the Transfiguration of the Saviour... 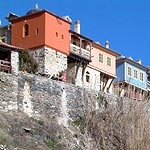 Pantocrator
The Holy Monastery of Pantocrator stands on the north-eastern side of the Athos peninsula, by the sea... 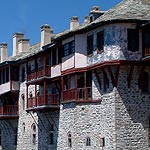 Xeropotamou
The Holy Monastery of Xeropotamou, a classic example of Athonite architecture, is more or less in the middle of the Athos... 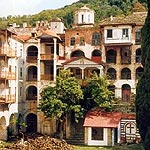 Zographou
The Holy Monastery of Zographou is hidden on a wooded hillside on the south-western side of the Athos peninsula... 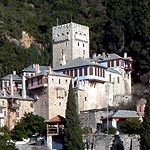 Docheiariou
The Holy Monastery of Docheiariou is the first monastery on the coast to which one comes when travelling by sea from Ouranoupoli to Dafni. 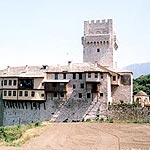 Karakallou
The Holy Monastery of Karakallou stands on a hillside between the Monasteries of the Megiste Lavra and Iveron... 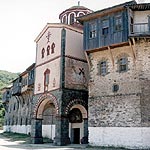 Philotheou
The Holy Monastery of Philotheou stands among chestnut trees on a plateau on the north-eastern side of the peninsula, near the ancient Temple of Asclepius. 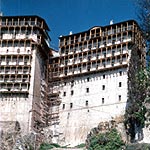 Simonopetra
The Holy Monastery of Simonos Petra, or more simply Simonopetra, is without doubt the most daring construction on the Holy Mountain. 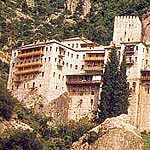 Aghiou Pavlou
The Holy Monastery of Aghiou Pavlou is in the western part of Athos and is dedicated to the Presentation of Christ in the Temple... 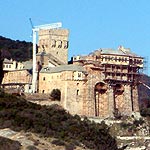 Stavroniketa
The Holy Monastery of Stavroniketa is the smallest in size on the Holy Mountain. It is on the eastern side of the peninsula between the Monasteries of Iveron and Pantocrator 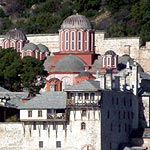 Xenofontos
The Holy Monastery of Xenophontos stands on the western shore of the peninsula, between the Monasteries of Docheiariou and St Panteleimon... 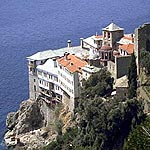 Gregoriou
The Holy Monastery of Gregoriou is on the seashore and can be reached by the caique which brings visitors from Dafni, the port of the Athos peninsula... 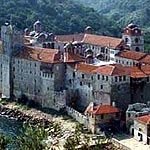 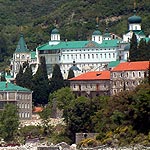 Panteleimon
The Holy Monastery of St Panteleimon, the so-called Rossikon (Russian), is on the south-west of the Athos peninsula, a little before one reaches the port of Dafni... 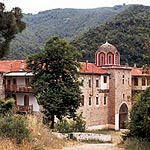 Konstamonitou
The Holy Monastery of Konstamonitou stands in one of the most picturesque spots on Athos, surrounded by woodland...